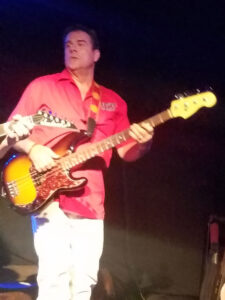 I began my musical journey in when I saw the Beatles on the Ed Sullivan February 9th 1964, nine years old. I liked the idea of girls screaming/fawning over the band, “Beatle boots” and the long hair. I bothered my parents for a guitar and finally got an acoustic with a Mel Bay beginner’s book…first song “Row, Row, Row, your Boat” (one chord). I was able to find local, likeminded, aspiring friends to hack away at songs.

1969 was my first professional gig on a six string electric guitar. We played at my school’s 8th grade graduation to cement my standing as a pro in the “summer of love” wearing a gold-colored Nero collar shirt. I was playing guitar in a 4pc combo when the bass player passed from a terminal brain tumor…I was now the bassist.

Moved to New Port Richey, started college, (to major in music) met three local musicians who changed my life forever. We created a band called “Witness” and had the “magic chemistry” that only happens a few times in life if you’re lucky. I initially was going back to Chicago land and was ready to leave the next day. The guitar player found out and came looking for me (way before cell phones) and just happened to pull into a gas station where I was making a call in a phone booth. He begged me to stay, I did, and what a great decision.

I lived on Madeira Beach performed as a bassist in the local beach scene, the keys, the islands, recorded an album at “Telstar studios” following The Allman Bros, played the Tampa A circuit, lived on “the road” performing six nights a week, had fun and gained mega experience and many musical styles.

Came to the state with the intention of building a second career, became a General Contractor and played music part time, revived my six string chops and searched for likeminded players/chemistry.

I went to local jams to meet players and filled a void to perform. Through that medium I met Beth. She happened to come to one of my shows where I let loose on the bass. Beth called on the chance I would be interested. Now I am in the band after procuring the last audition spot. Now, for the second time in my life I am in a band that has the “magic chemistry”… changing my life again.

Nick name: …a guitarist when introducing me would say “Dale on bass!!! Lookout he’s “Dangerous” on that thing!! Hence “Dangerous Dale”