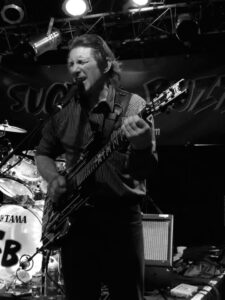 At age 11, Henry picked up a friend’s acoustic guitar with only three strings and started playing popular TV theme songs. After hearing his next door neighbor cousin play House of the Rising Sun on his electric guitar, he was hooked! He soon purchased his cousin’s guitar and amp and learned by ear to play popular songs from the 60’s. He and a friend from Church formed a band that performed their first gig at their 7th grade school dance. Then in high school, they played at local events and college parties. When Henry enrolled at UW-Stout in Menomonie, Wisconsin, he joined a band called Smoke, a high-energy rock group. Smoke embraced the 50’s return by adding a 2-hour Back to the 50’s show called Hurst and the Shifters, performing both acts the same night! Doing shows in Ashland, Green Bay, Madison, Eau Claire and Decorah, Iowa! After a short stint with a group called Dancer, playing Led Zeppelin, Yes, type rock, Henry moved back to the Twin Cities in the late 70s, joining a band called Brandy. Then on to Woodbridge up to the early 80s. He performed with Snak Attack for 10 years and now enjoys his time performing with Function Junction and the rock band Sugar Buzz.